Not all of our heroes are people we have met.  Some of them lived long before us, lived in a place for away, died long before we were born.  We know about them through books, movies, or songs.  And though we did not know them personally, their stories have shaped us.

Growing up going to church, many of the stories that shaped my world were the biblical stories.  I heard my parents read them to me, I was taught them in church, and I remember singing about them in Sunday School.  I wanted to “Dare to Be a Daniel.”  I want a sling that went “round, and round, and round, and round” until that smooth stone released from my sling struck down Goliath.  I wanted to be one of the men that made a difference. 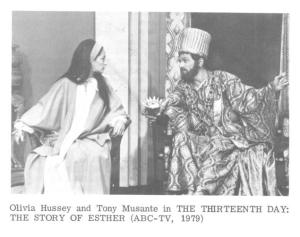 In 1979, I would have been five years old, and the movie “The Thirteenth Day: The Story of Esther” was broadcast on ABC.  I remember where I was sitting when I watched it.  We were at our neighbor’s home, Paul and Mary Schumacher.  I still remember that house, the pattern on the kitchen floor where I sat, my parents sitting in the dining room talking with Paul and Mary.

As my parents sat in the next room talking and laughing, I remember watching with horror as Haman plotted to kill the Jews.  I can still feel the overwhelming feeling that I can now identify as injustice at the possible genocide of whole people group.  I remember watching with anxiety as Esther, who was so afraid, bravely put into motion a plot that would save her people.  That night, I didn’t want to dare to be Daniel, or to slay Goliath, I wanted to be Esther.  I wanted to save my people.  I wanted to be made for such a time as this!

The power of story — of narrative — is tremendous.  The stories that we tell our children through books, movies, and songs shape their world.  It informs them of what is important and what type of people we hope them to be.  We can never be too careful in the powerful art of storytelling with our children — or for that matter in choosing the stories that continue to shape us.

Because of this, I fear that we do a tremendous disservice at times within our churches and our homes.  I don’t remember singing about Esther, or Ruth, or Rahab, or even Mary for that matter.  I don’t remember celebrating the stories of the women in the Bible– yes, Sunday School talked about these women from time to time, but we didn’t celebrate them through songs, we too often saw them simply as supporting characters in the stories of men.

I welcome comments and questions here on the blog or via private communication.
Join 28 other subscribers